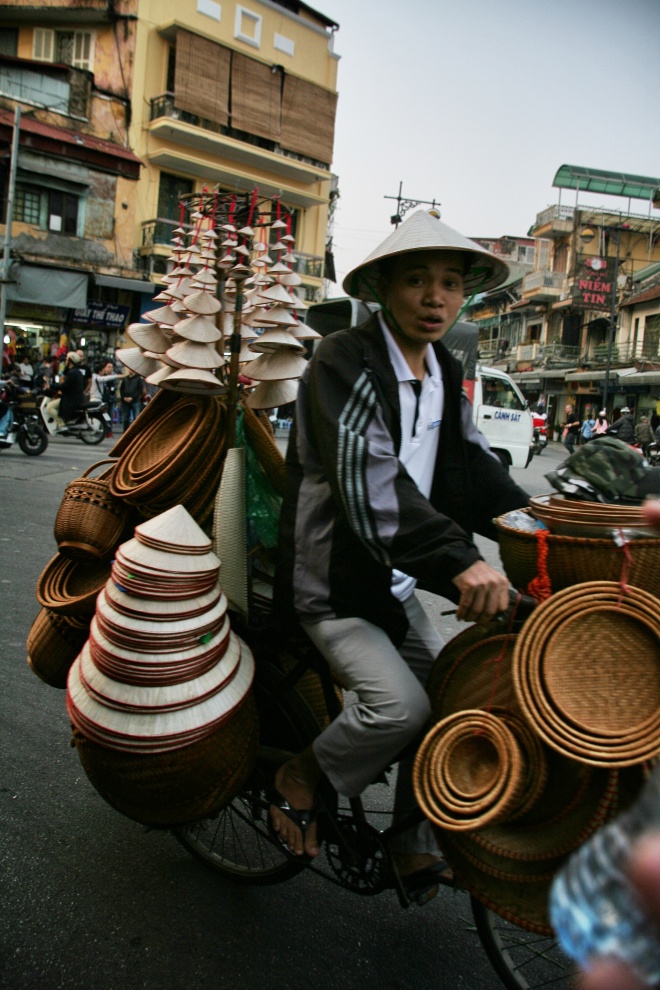 I’m not sure that there are enough adjectives in the English dictionary to describe Hanoi. Hanoi is all the adjectives – it is an an absence of negative space. It has no time for the superfluous or irrelevant – it is constant energy and never-ending chaos. Yet the chaos is not random, it serves a purpose, it’s systematic.

The traffic never stops. The meaning of Hanoi is a ‘city inside rivers’, and the rivers are its traffic. It is a continuous flow and non-existent ebb of infinite streams of motorcycles. Sometimes the stream narrows into the rivulets of the alleyways, only to pour out again into the ocean of vehicles that is the main road. In Old Hanoi especially; lights, signals and rules don’t exist. A break in the din of the horns sounds louder than the horns themselves. But just like a stream, the flow of motorbikes is reactive, weaving gracefully around whatever object is put in its way. Crossing the road in Hanoi definitely takes patience for a novice, but it never feels truly dangerous.

I fell hopelessly in love with the Old Quarter in Hanoi. Wandering down its impossibly tangled alleyways felt more revealing than visiting any national museum. The history is told by the faded, french colonial buildings that flank the streets, and the incongruous baguettes served at the ubiquitous Bahn-Mi stands. Hanoi’s even confusingly dubbed the ‘Paris of the East’ – presumably these days because of its charm rather than aesthetic similarity. The culture is revealed by countless lives that are largely lived outside. Shop and general life activity spills out openly into the narrow, suffocating streets. Shop-owners, merchants, kids, business men and women chat, shop, work, cook, eat and drink out on the pavements.

The end result of this sensory assault is (or was for me) an overwhelming sense of calm. Weaving through the interminable traffic, skipping over puddles of indescernible liquids, desperately trying to avoid burns from scalding motorcycle exhausts – here the focus is on staying alive and not getting hopelessly lost in the identical-looking, ancient streets. There is no time for overthinking or introspection. The focus is no longer yourself, but the people you’re sharing this precious little space with.

Efficiency is obligatory to cut through the chaos. Many of the streets of the old quarter are named after the products they sell. Cotton street, Leather street, pickled fish street, clam worm street, and excitingly, charcoal street. If you plan on your phone dying whilst travelling like I did, then do it in Hanoi. Rationally fearing that fixing my Iphone would put a huge dent in my backpacker budget, I went to a local store suggested by one of the unfailingly friendly locals we met. After about half an hour where we watched the phone be fixed in front of us (they had live-feed screens for ones that had to be fixed round the back) I had a fully functioning phone and a wallet only five dollars lighter. If Vietnam is a socialist country, then they’ve obviously found the magic formula.

THINGS TO DO IN HANOI

If you’re desperate for a break from the chaos, head to peaceful Ho Hoan Kiem Lake and take a stroll around the well-kept grounds. From here it’s a short walk to Cafe’ Pho Co, one of the most popular spots to try Hanoi’s famous egg coffee. Invented in 1940 when there was a milk shortage in Vietnam, the drink consists of thick black Vietnamese-style coffee topped by a creamy-soft foam of beaten egg-yolk and sugar. The hot version comes in a small bowl of warm water to keep the temperature.

Cafe Pho Co is slightly more expensive than similar cafes as it boasts a view over Ho Hoan Lake. It has something of a speak-easy feel – entrance is through a silk shop that leads to a beautiful Chinese-style courtyard complete with a resident rooster and enormously fat cat. It can be hard to find but don’t give up, the silk shop is currently called Cicada Silkli.

The biggest regret of my Asia trip was not having done this tour. There are so many street food spots and cafes that it would have been great to have someone knowledgeable scope out the best and most unique ones (although the street food is all pretty amazing). The reviews are exclusively great and I can’t bear to look at pictures as the food looks so good!

The Old Quarter in Hanoi has hundreds of fake designer shops (especially sports gear) that actually sell some pretty well-made stuff. I’m not sure I could say it’s as good as the real thing but I’ve been wearing my ‘North Face’ jacket non-stop. You’ll see them everywhere in the Old Quarter but the shops tend to concentrate around Hang Gai.

Set in lovely picturesque grounds, this serene ‘temple’ (originally a Confucian University) is another place to get away from the crowds. Walk through ancient courtyards and landscaped gardens in this age-old place of study.

I recommend doing the street food tour at the beginning of your trip so that you can go back to your favourite places. All of the street food is pretty amazing in Hanoi but here are some of the best spots we stumbled on;

For Bun Cha. Bun Cha is a Vietnamese dish of pork meatballs served with a bowl of rice noodles and loads of delicious fresh sides – crisp lettuce, plenty of fresh herbs, a variety of pickles and dipping sauces. This place was always packed and was mainly frequented by locals. So, so good.

For beef pho. Absolutely ram-packed with locals at all hours of the day. The pho is handed out assembly-line style by a lady who takes her delicious beef pho very seriously. We went here three times.

Hanoians are huge tea and coffee drinkers, and I’m convinced that it’s partly because it’s so fun to sit and drink on those tiny plastic stools while watching the bustling world go by. Cong Ca Phe is a military themed chain that happens to serve the most delicious coffee drink I’ve ever had in my life. I’m not normally a sweet tooth but the blended iced coconut with coffee is perfect after a humid day walking around the city.